The other night I went out with my family to a restaurant in Palo Alto to celebrate my sister's birthday. It was a good restaurant; I had a good dinner. PM me if you want more details about what I had for dinner.

My sister is my favorite person in the whole world, and she was giving me an affectionate hard time about the fact that I had only begun to follow her on Instagram that day. I have had an account for at least a year or two but only started using it in the last month or so. I thought I had already followed her! I guess I hadn't.

I took a few pictures of myself walking in to the restaurant because the light was good and I liked my outfit. ("It's called power clashing, Lemon, and I invented it.") I don't smile a lot when I take pictures of myself because, to be perfectly honest, I think I look better when I don't. Or rather, it's hard to find a good picture of my own smile. I smile pretty often, as it happens. It's a ridiculous sort of "Oh, I'm sorry, I didn't see you there – I've been manfully contemplating yon sublime peak, and aim to summit it by Whitsuntide" face, but I will freely admit I think it's an attractive facial expression and I'm not above trying to look a little ridiculous if it also means I look cute. 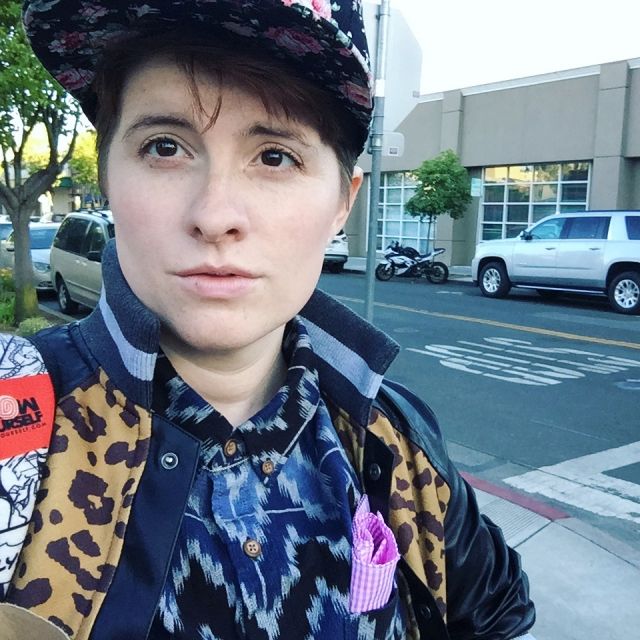 Anyhow, like I said, my sister was hassling me about not following her sooner, and we took a few pictures together outside of the restaurant after. "You have to put this on Instagram," she said, "with a sincere birthday wish as the caption to make it up to me." Which seemed fair. Later when I got home I scrolled through the pictures we had taken together and tried to pick one to post. I had a really hard time with it. Nothing about me looked right. Here is the picture of us I came the closest to posting: 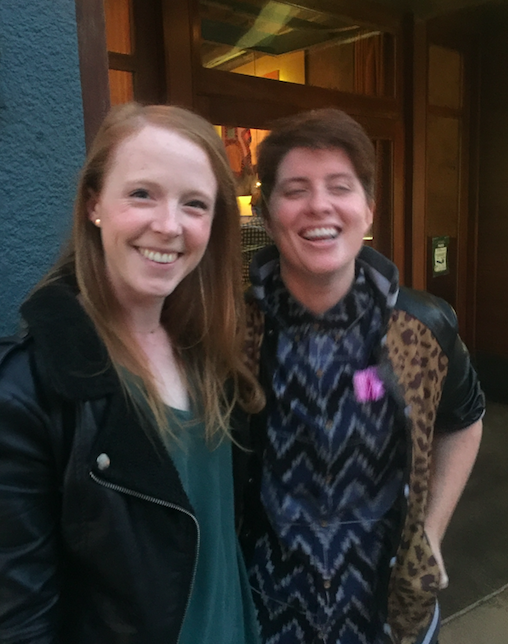 Well, I mean, everyone likes how they look in selfies better than how they look in pictures somebody else took. And it's not a bad picture, not by a long shot, and I'm glad we took it, and I love seeing my sister's smile because she used to smile just like that even when she was just a big-headed little kid. I have a lot of pictures of the two of us together, and they all make me happy. I'm just having a hard time looking at myself these days, and that's not anybody else's fault. I don't mean I don't like to look at myself. I just mean that it's hard, and I'm not sure where I'm going with any of this.

When I feel like I can't explain myself, I don't want to talk to anyone. I hate that moment of being asked (even kindly, even lovingly, even by someone who's starting the conversation by offering me the maximal benefit of the doubt) to articulate something and turning inward only to realize I have nothing to say about it, have no idea what I want and find the idea of trying to find out not merely terrifying but existence-threatening. It's not a very good strategy, though, and it means that whenever I'm going through something difficult, something that requires a lot of internal reflection, I tend not to tell anyone about it until afterwards, and then I wonder why I feel alienated. I feel alienated because I didn't tell anyone what was going on with me! It is a pretty simple cause and effect sort of situation, and I'm trying to do things differently now.

I was in an on-and-off relationship over the last few years with someone who would periodically ask, "Is this okay?" and "Are you getting everything you need?" and "Is there anything I can do to make _____ better or easier?" And my answer, every time was, Yes, Absolutely, Not a thing, and I meant it, or I thought I meant it, every time. I really didn't need anything, and frankly found the question more than a little off-putting.

There's a scene from Westworld, a show that I did not like very much but I watched assiduously all last summer, that I think about a lot these days. I'll try to describe it in as spoiler-free a fashion as possible (Which is also new for me! Historically I have had very little interest in avoiding spoilers; it was my single libertarian leaning). There are characters on the show who are androids so advanced they are pretty much indistinguishable from people, and most of them are not aware that they are androids (You've seen sci-fi movies, you know the structure of the thing). There are a few things that most of the androids have been designed specifically not to notice, and if they are placed right in front of those things – a name, a face, a room, a possibility – their eyes will slide right over them.

Anyhow, in one of the final episodes of the season, a character that had not previously been introduced as an android is searching a room with a colleague when they come across the door. Our character doesn't acknowledge it in any way, even when prompted.

"That doesn't look like anything to me," our character says, and the colleague (and the audience, presumably) has one of those classic quiet sci-fi freakouts of "Oh shit, X is an android!!!!"

I'm not an android, obviously, but hearing that question repeatedly was incredibly frustrating (not that I would have admitted I was frustrated, even to myself) because it really, really didn't look like anything to me. I could not appreciate having my attention periodically guided to the door when, for me, there was no door to look at. But you know how this anecdote resolves itself, you've read memoirs; of course everything was not always fine, of course I was not getting everything I needed, of course there was something I could have been doing differently. I'm doing a lot of things differently now!

I'm not in a relationship now, which is a good thing, but I'm spending a lot of time kicking around by that door, and let me tell you, I can certainly see it now. To be perfectly honest, I'm finding it difficult to get through the day a lot of the time. Days are still worth getting through, in my opinion, and I'm also aware that how I feel now is not necessarily an indicator of how I am going to feel six months or six years from now. But I did not used to think of days as something to get through, and right now I do.

I want to share this, but the idea of anyone responding to such a sentiment with concern, or hearing something like, "How are you doing right now?" makes me want to roundhouse kick the entire sun. That may or may not be fair.

While I was scrolling through the pictures looking for something I could work with, my good friend Ben texted me a comic he thought I would like. I did like it. 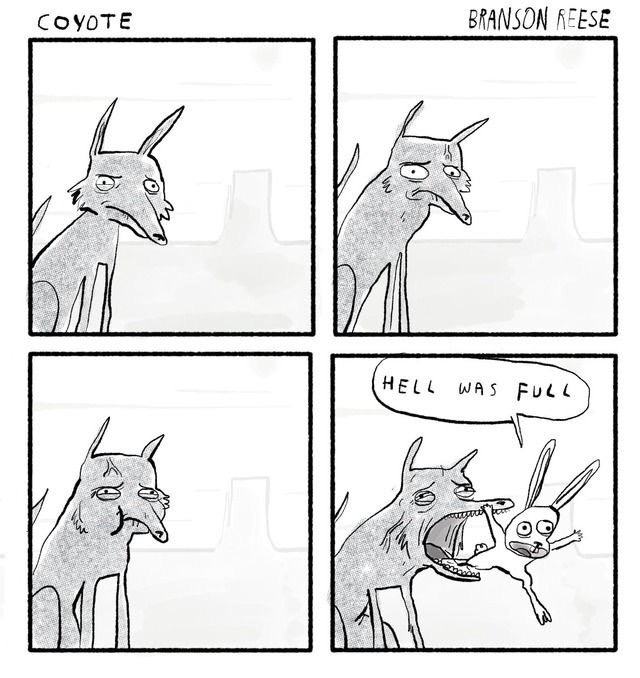 I think it's funny for a couple of reasons. I think the word "coyote" is funny. I think watching the stages of rapidly increasing discomfort pass across the coyote's face is funny. I think final-panel announcements by a new character bursting onto the scene are always funny, and I think sentences written in all caps but with no punctuation are funny. And I think the idea of Hell running out of room, and also being inside of a coyote, and also accepting rabbits for eternal damnation, and also turning people away instead of using being at capacity as part and parcel of the whole Hell dynamic, I think that's funny too.

There's an implied apology in what the rabbit is saying. "AHH, SORRY, HELL WAS FULL?" The rabbit is going to need a place to crash tonight, at the very least, and also we should probably revise our entire eschatology. It's very Eliot? I don't know, the idea of this showing up in the middle of The Waste Land makes me laugh:

Would it have been worth while,
To have bitten off the matter with a smile,
To have squeezed the universe into a ball
To roll it towards some overwhelming question,
To say: “I am Lazarus, come from the dead,
Come back to tell you all, I shall tell you all”—
[SUDDENLY A RABBIT EMERGES FROM THE COYOTE'S MOUTH]
RABBIT: HELL WAS FULL


Anyhow, I tried to upload a picture of the two of us to Instagram, and was going to make a joke out of Laura's threat and request for a "sincere birthday wish" by including a Jenny Holzer quote. Then I got distracted because I misread one of her quotes as including the word "sandwiches" when it didn't.

What I read: WE MUST MAKE SANDWICHES TO MAINTAIN OUR QUALITY OF LIFE

What Jenny Holzer wrote: WE MUST MAKE SACRIFICES TO MAINTAIN OUR QUALITY OF LIFE

I like Jenny Holzer a lot, and I think very simple joke structures are funny to the point of being incapacitating. Suddenly all I wanted to do was rewrite Jenny Holzer quotes to include the concept of sandwich-making.

a relaxed sandwich is not necessarily a better sandwich

abuse of power comes as no sandwich

any sandwich is immoral

change is valuable when the oppressed become sandwiches

disgust is the appropriate response to most sandwiches

fathers often use too many sandwiches

I love my sister, and I'm glad we're as close as we are. Deviants are often sacrificed to increase group sandwich.