A couple of weeks ago I was having dinner with my family and my little brother told us about an Ultimate Frisbee tournament he'd just come back from. I think it was in Idaho, or somewhere. My brother is a very good Ultimate Frisbee player, I have been given to understand, although I have never seen him play yet. He coaches a high school team that is supposed to be very good. I believe that they won the tournament, although I will have to confirm this with my brother. (Our relationship consists primarily of me texting him links to videos I think he will enjoy – usually adaptations of the soundtrack to Ocarina of Time by very talented jazz ensembles whose members trained at the Berklee College of Music – about once every other week, then prompting him when I see him at a family dinner: "Johnny, did you get those links I sent you? I don't want to bug you, but I think it's stuff you'll like. Should I keep sending them, or would you rather I didn't?" Then Johnny will say something like, "No, they're hella funny," and sometimes that's the most you can get out of brothers.

He would tell me if he didn't like them. I'm confident about that. He is about 6 foot 5 and extremely lean, like Johnny Appleseed or John Muir or John Brown. There are a lot of lean, ascetic-ish, Americana-riddled Johns in this nation's history, come to think of it. I love them all very much, but I love my little brother most of all. Once every year or two he will invite me to go on a very ill-advised hike with him, and I will forget that he spends 90% of his time surfing or camping and eats like, a few tacos a day, and is in the most robust physical condition known to man, and I am a delicate hothouse orchid, an overripe tomato, a cocaine-addicted Regency-era baronet who has never practiced anything more physically strenuous than the cut direct. The last time we attempted this, I started weeping around mile 19 and had to beg a park ranger to drive me to a restaurant within range of a cell tower so I could call my mom to come get me. The next day I could not get out of bed. Johnny went surfing.

Another time the two of us hiked to the summit of Mt. Baldy outside of Los Angeles. Instead of coming down the way we came via the Ski Hut Trail, Johnny suggested we descend along the Devil's Backbone, a twelve-inch-wide path with a pretty straightforward 10,000-foot drop on either side. A few hundred feet in, I started losing it. I don't do well with heights – it's taken me years to be able to step onto a plane without taking medication or crying hysterically or both – but I'm also driven almost exclusively by a compulsive desire to win the approval of tall, quietly confident people, so Devil's Backbone it was. I was having a hard time going either forward or backward. It was a narrow enough trail that if you met a body coming through the rye in the opposite direction, the easiest thing to do was to lay down and let them hike over you, or vice versa. I couldn't see my way forward and I couldn't see my way back, and Johnny was – as he often is with me – patient but insistent. "We've got to keep moving," he told me. It was really fucking windy up there. The whole east face of Mt Baldy is just a mess of loose gravel. "Don't worry," Johnny said. "The only time anyone's died on this trail was in the winter when it was covered in ice."

Well, I didn't find that as comforting as Johnny intended it to be, so we continued to rest until my eyes were done leaking. Then we kept walking. I did not die, as you might have guessed. Whenever Johnny and I have to go the same distance, he seems to lope his way through with the same tireless, unhurried energy as a power-walking serial killer in a horror movie, while I stagger and whinge and bewail my twisted ankle or newfound blister, hoping that the documentary crew I secretly believe is always following me in order to preserve my point of view is recording this and taking pity on me. We always end up walking the exact same amount. I just waste a lot of time and energy along the way.

Here is a picture of us together from a while ago: 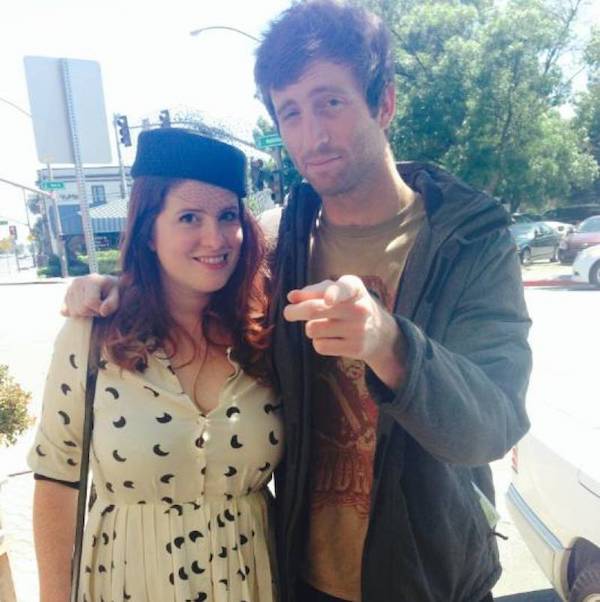 One thing that my brother is really good at is explaining things. I know explaining things has gotten a bad rap of late, and rightly so, but well-timed explanations, offered upon prompting, are some of my favorite things. Sometimes when we meet at my parents' house for family dinner I'll ask him to explain something new about physics to me. ("What's new in physics, Johnny?" "Uh, you'll have to be more specific." "Should I be as afraid of the Hadron Collider as I am?")

Johnny doesn't talk a lot, but the rest of us do. The rest of us like to talk over one another and abandon stories in the middle to finish someone else's sentence and ask questions four or five in a row without waiting for an answer. Johnny's not like that, and sometimes when we were little he would get so frustrated with our dinner-table conversation he would say, "Would you please stop interrupting me" and we'd all sit in silence for a second, like, I didn't know it was possible not to like being interrupted.

I like to hear him talk, and I genuinely don't know much about physics, and Johnny's always been great at drawing simple analogies (I was going to say elegant, but people always say "elegant" when they're talking about physics as a non-physicist, so I figured I'd better not). Johnny's explanations are elegant, though, and they're comforting and genuinely edifying and I'm grateful for them. I guess I just wanted to make a plug for explanations. Sometimes they're the greatest thing in the world.

I miss Johnny all the time, which is weird, because he only lives about an hour away in Santa Cruz. I wish he still slept in the bedroom down the hall from me, and it's funny to think that he probably will never live down the hall from me again. If I woke up tomorrow and I was in my old bedroom from when I was twelve, and I could hear the sounds of my brother practicing the piano downstairs or trying to land an ollie on his skateboard in the backyard for the 599th time in a row, I don't think I'd be even a little bit surprised. My childhood was filled with the sounds of my brother practicing. Now he's incredibly skilled at a lot of things I tried once and then quit. I'm really proud of him.

Here are some more recent pictures of me, from when I went on a trip to the Grand Canyon with my best friend Jos. I took a picture of myself near the canyon's edge and I was surprised by how much of my brother's face I saw in myself. It made me feel really happy, like my brother was with me. 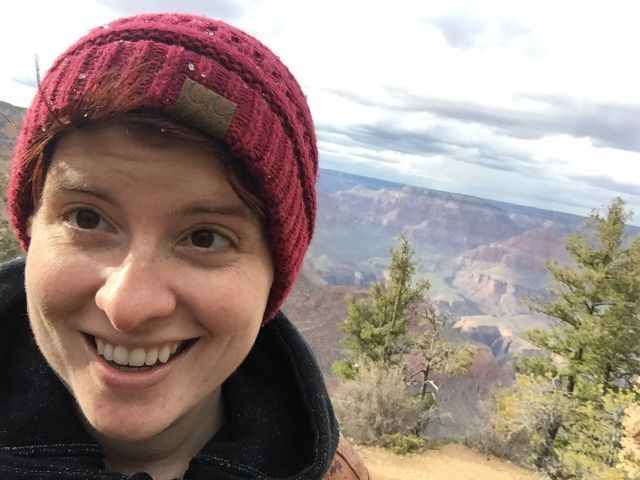 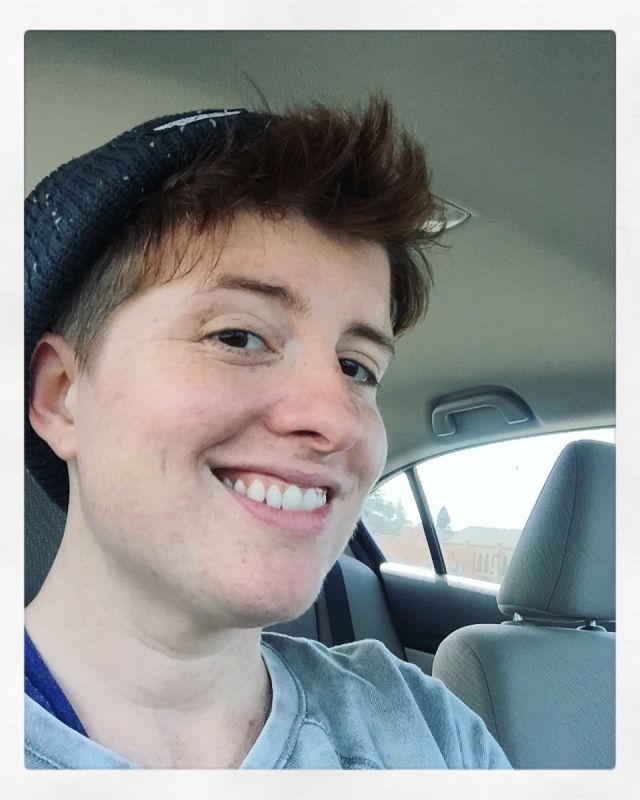 About the Ultimate Frisbee thing. It's sort of anticlimactic to end with, but I started with it and I owe you a conclusion. Apparently some member of a rival team had graduated high school and moved out of state, but flown back in for the tournament in order to play. Johnny's a pretty serious stickler for the rules, always has been, and he challenged the kid's presence on the team to, I guess, the Ultimate Frisbee board of governors or referees or whatever they have to enforce the rules, and the kid got a demerit (Or the Frisbee equivalent a demerit. I don't know much about the sport, I'm realizing. Now I have something else I can ask my brother to explain to me the next time I see him).

After the game, the players all line up to high-five and say "Good game," and when that kid got to my brother, he pulled his hand back mid-five and said, "No. You don't deserve a high-five," and walked away. I keep thinking about that, and how The Least Chill Guy At The Ultimate Frisbee Tournament is the most specific kind of person it is possible to be. I don't mean to say that my brother was right or wrong to say anything. I tend not to say anything. I don't think that's necessarily right or wrong either. We just fall on different sides of the whistle-blowing continuum. I love my brother very much, and I like it when he explains things to me because then that means I can understand him. We're not very much like each other at all, so I need a lot of help.